Upward and outward urban growth and why transport folks should care

By Paul Barter September 10, 2019
Where in the world is urban growth fastest? How much can we expect by 2030? Where is the growth mainly outward onto new land? Where is it mostly upward in the form of taller buildings?

These questions (and others) are tackled in a unique way by the important World Resources Institute (WRI) working paper, “Upward and Outward Growth: Managing Urban Expansion for More Equitable Cities in the Global South”.

I spoke with co-author, Anjali Mahendra, about the paper and why transport folks like you and me should pay attention. The result of our conversation is Reinventing Transport episode #17. You can read some detailed highlights below or listen to the interview in full. 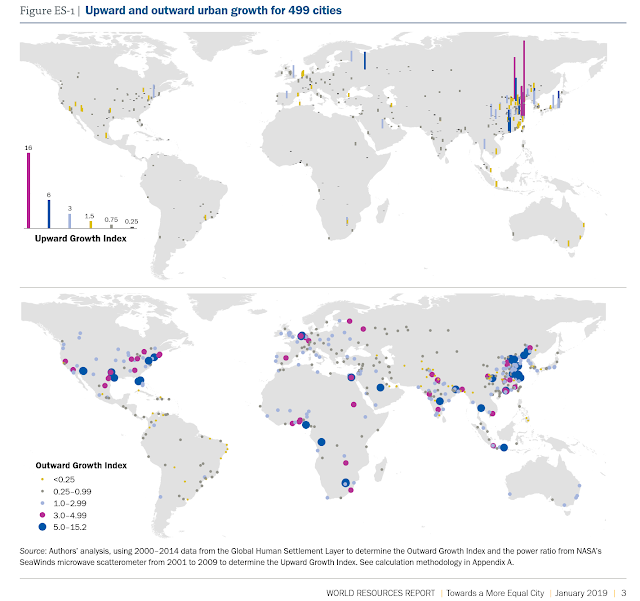 The report was prepared as part of the (mammoth!) effort towards the next edition of WRI's flagship World Resources Report, entitled "Towards a More Equal City" and was co-authored by Anjali Mahendra (Director of Research, from the World Resources Institute Ross Center for Sustainable Cities) and Karen Seto, the Frederick C. Hixon Professor of Geography and Urbanization Science at the Yale School of Forestry and Environmental Studies. 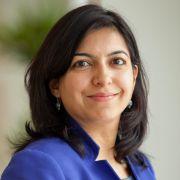 Here are highlights of my interview with Anjali Mahendra:

[1:10] A key takeaway: urban land issues are central to almost everything we do in metropolitan areas, whether it's transport, water and sanitation, housing or energy services. Urban land is the fulcrum of almost all urban sustainability issues. It is also subject to enormous political influence and power with huge implications for cities' economic and environmental futures.


[2:33] The urban growth challenges are daunting. For example, between 2015 and 2030, the total urbanised land in the world is projected to grow by 80% and much of that growth will be in Africa, South Asia and some in Southeast Asia. Much of the urban growth will be in cities in the 1 to 5 million population range, which tend to get little attention. 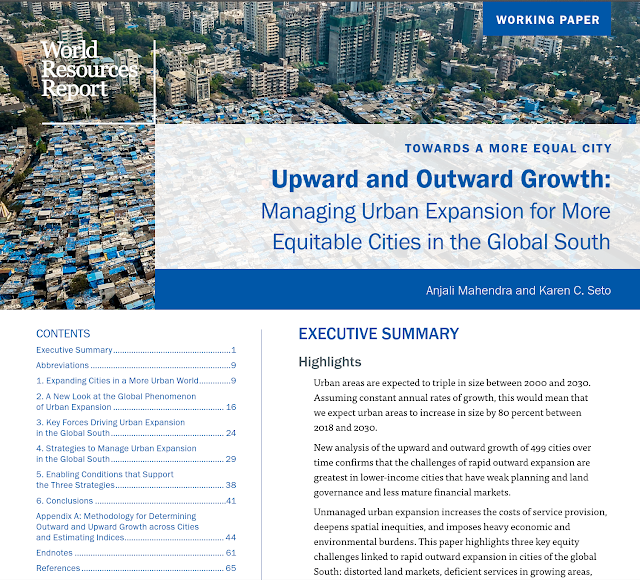 Yet, the paper is also rich in case studies. It is far from being all data and abstract theorising.

[5:10] The starting point was to ask if (and how) solving inequities in access to core urban services housing, land, transport, water, sanitation, energy can create a more economically productive and a more environmentally sustainable city for everybody.

A first step was city-level demographic and economic data from Oxford Economics and the generation of four clusters of cities based on whether urban economic growth will keep pace with urban population growth (see the image below). 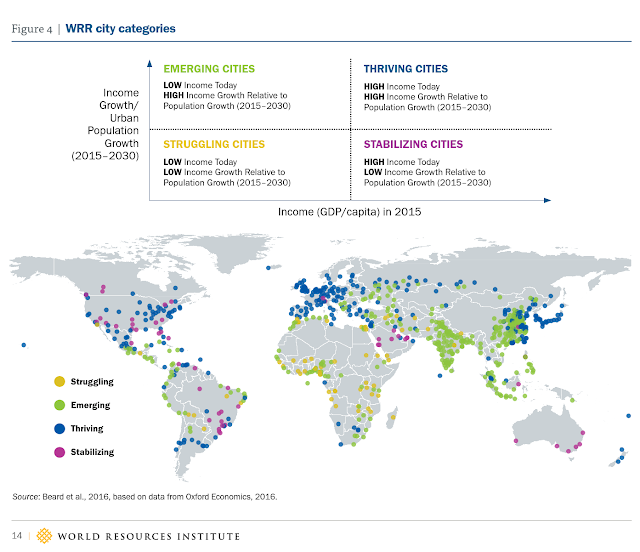 [8:27] A breakthrough came in discussions that led to the collaboration with co-author, Karen Seto. There has been much recent use of satellite remote sensing to understand the outward growth of urban areas. But collaboration with Seto's laboratory led to analysis of microwave radar data from a NASA scatterometer that generated data on cities' upward growth, albeit at relatively low resolution.

The report brings together insights from the economic and demographic data, the urban expansion data (both outward and upward) with analysis of the economic, political, regulatory and policy forces that are driving the trends.

[17:39]  There were striking geographical patterns in the remote sensing results on outward versus upward growth indices (see the map at the top of this post). Almost all of the upward growth was in East Asia.

Emerging cities were more varied but also had mainly outward growth, except in China (which has a mix of Emerging and Thriving cities).

Upward growth was common in the Thriving cities cluster. And Stabilising cities were diverse in their growth patters.

[21:05] The City Expansion Index dataset on upward and outward urban growth used in the paper is available for viewing, download and analysis.

[21:59] It would be a mistake to assume all outward growth is low-density. In Struggling and Emerging clusters especially, much of the peripheral growth is in low-rise but crowded settlement patterns, with buildings tightly packed together, little space for public facilities and high occupancy rates per unit of floor space. As a result, low-income outward growing cities like Lagos typically have high population densities. Kinshasa has almost the same population density as Bogota, Colombia, but has overcrowding that is four times higher than in Columbia's capital. Population density and built form density can be very different.

[11:04] 'Informality', both of land tenure and in relevant industries such as public transport, has huge implications and is an important theme in the report, especially for many cities in the Struggling and Emerging clusters.

For example, informal-sector settlements tend to emerge long before high-quality public transport and this complicates hopes for Transit-Oriented Development. In fact, conventional approaches to TOD can be a challenge even on formal-sector land, which tends to be expensive because it is often relatively scarce and is often therefore occupied by development that serves high-income groups with a low propensity to ride any new transit.

[14:44] Many peripheral informal settlements are served by some mix of motorcycles, minivan-based unregulated public transport and various taxi-like modes of transport (like auto-rickshaws in South Asia). This enables affordable housing but often results in long commutes, especially if they involve changes from one vehicle to another. Another paper in the WRI series tackles this accessibility issue head on. Both papers discuss the potential for doing better via better-integrated ecosystems of services of various kinds.

[25:41] We touched on some of the paper's key policy suggestions but, if you are interested in these please go to the paper itself. Strategies that came up here included:

[28:36] The vicinity of Bengaluru (Bangalore) airport is an example of many of the difficulties with rapid but uncoordinated private and informal development in an area with low availability of water and low transportation connectivity that falls beyond the boundaries reached by key agencies. In some cases, multiple agencies have overlapping responsibility.

In a more positive example, Mexico City has been learning from its earlier experience of building how low-cost housing in inaccessible locations on the periphery. It now instead seeks to direct development to zones within the city boundaries where core services can be provided.

Similarly, Johannesburg has been seeking to guide development into transit-oriented urban development zones served by BRT or rail.

[33:12] The next paper in the series, "From Mobility to Access for All: Expanding Urban Transportation Choices in the Global South" (by Christo Venter, Anjali Mahendra and Dario Hidalgo) focuses on accessibility challenges for different segments of the population. Johannesburg and Mexico City are two key case studies in that paper.

Johannesburg is also the focus of a cross-sector case study on how to improve equity and equitable access, and see broader citywide benefits, economic benefits and monumental benefits over a lasting period of time.

[35:33] It is difficult to get people interested in such a wonkish topic. Land policy seems to confuse and bore people. But it is incredibly important. A seasoned transport professional told Anjali that the best solution to most transportation challenges is dealing with land use policy and land regulations in the right way.

[37:40] Given the daunting challenges and trends, does she have hope that the paper's suggestions can make a difference? Without minimising the difficulties, Anjali does see progress happening in many ways in many places and a surprising level of determination to do better among many of the key people in the right positions to make a difference.


This post was prepared with the help of a transcript created by https://otter.ai