Electric two-wheelers: how big will they be?

I asked Stefan to join me for this month's Reinventing Transport, after reading his “Electric Two-Wheelers, Sustainable Mobility and the City”.

Learn more about Stefan Bakker via LinkedIn or ResearchGate. 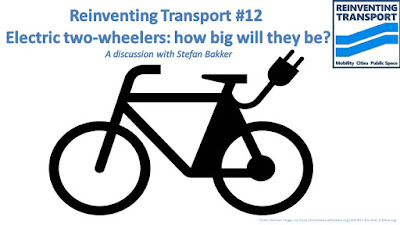 Electric two-wheelers, such as e-bikes, get less attention than electric cars or even electric buses. But two-wheeled electric vehicles are increasing in numbers faster and are already making more of a difference to carbon emissions than their larger cousins.

Why are their numbers surging? How much potential is there? Which kinds will take off, the lighter/slower or the heavier/faster? (Do you see the double meaning in the title?) What benefits and risks/costs do they have? What policies are appropriate? Stefan and I tackled these questions and more.

Here are highlights from the conversation.

You can help me make time to continue this work by becoming a Patreon patron.

For more detail, listen to the audio (with the player below or find Reinventing Transport wherever you usually get podcasts or watch the Youtube version below).

I used the Otter.ai service for the transcript that helped me prepare this post.