"Slow" is not a dirty word 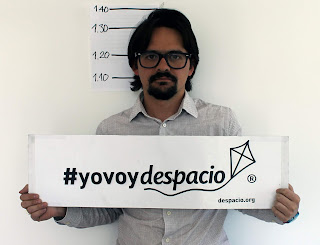 Carlos Felipe Pardo and I discussed the intriguing and neglected idea of "slowness" in urban transport.

Slowness has a poor reputation but it has its place, especially in cities.

Speed offers to bring more destinations within reach. Yet slow-but-steady is often better than a series of sprints between traffic signals or delays.

Does that sound puzzling? Read on (or listen) and all will become clearer.

Listen with the player above or subscribe to the podcast with your favorite podcast player (click on the wifi symbol) or read the detailed summary below.

Digest my discussion with Carlos in several ways:

Carlos is Executive Director of Despacio.org, a non-profit foundation based in Colombia. Despacio is Spanish for 'slow'! If you don't read Spanish you can try the Despacio site in English google translation.

Why the name "Despacio"?


Despite being told it was an awful idea, Carlos and his colleagues insisted on calling their transport-focused non-profit organistion, "Despacio", which is one of the two main words in Spanish for going slow (the other being lento).

Carlos explains that their focus is actually appropriate speeds. But that's too long (and boring). Despacio provokes curiosity. It provokes a conversion.

When they hear about proposals to slow traffic, many people assume their trips will take longer. Carlos explained that this is usually a mistake.

We are talking about reducing top traffic speeds NOT average travel speeds.

Reducing the maximum allowable speed in a road or street often leaves travel times more or less unchanged. In fact, if traffic can be made less stop-start, average speeds can even increase.

Unfortunately, this is difficult to convey in a concise yet convincing way.

"I don't understand. How come you tell me to go slower and I'm actually going faster?" is the reaction Carlos hears.

Our evolutionary heritage makes us poorly equipped for high speeds. Our field of view narrows. Our judgments are poor.

So roads designed for speeds higher than the 30 km/h or so that was top speed for our ancestors,  need elaborate traffic engineering and rules to guide us and to keep vehicles separate from unprotected human bodies.

Wherever we want to be able to roam the streets on foot or using small vehicles, like bicycles or scooters, we really should be keeping the traffic slow: 30 km/h or less.

Difficulties with words and language on this issue came up several times in our conversation.

For example, the word, speed, can just mean whatever the speed is. But it also implies "fast".

Carlos and Despacio have struggled with this.

Talking about "lower speeds" is not quite right and there was that average-speed confusion mentioned above.

"Better speeds" might be OK but many people just assume it means faster speeds.


For certain places, people do get it

It is not all gloom however. Despacio surveyed Bogotá residents and found high levels of support (80%) for 30 km/h zones (even with strong enforcement) in residential areas among other places.

And, of course, campaigns in many countries in Europe (for example) have led to a growing trend for 30 km/h zones and even for more radical "Play Street" or "Living Street" (Germany's "spielstrasse" and Netherlands' "Woonerf") redesigns of certain streets.

But Carlos lamented the difficulty.  Slowing people down still sounds toxic to many politicians and decision-makers.

Slowness can seem almost like a dirty word, with very negative connotations, despite all the benefits of slowing down traffic in appropriate places.

We also discussed the idea of a street as distinct from a road or a highway.

Streets have multiple purposes, including as places and for local access, while roads/highways are more primarily about movement.

Many people conflate the two unfortunately. For Carlos, this confusion goes beyond the words and reflects confusion about how to design the city.

We also had a little epiphany when I suggested it might be useful to extend how we think about the departing and arriving parts of longish private vehicle trips.

We usually think of departing and arriving as just a few meters and a few seconds - going to the vehicle, getting in, and maneuvering out of the parking area.

But it might be better to stay in a slow "departing" or "arriving" mindset for longer and include the parts of the trip within the neighborhoods of the destination and origin. If it is a long trip, then the "line haul" part can often be fast, on appropriate roads designed for speed.

Instead of thinking of the departing and arriving parts of a trip as only twenty meters or so, we should think of them as the first and last kilometer or two perhaps.

In a trip of 10 or 20 km, a slow beginning and end makes only a tiny difference to the journey time but makes a huge difference to each neighborhood.

Of course, public transport trips are usually like that already, since we need to get to the stop or station and that is usually done on foot or with a bicycle or such-like at a human speed. We need to extend the assumption of extended-but-slow departing and arriving to motoring too.

We often need to talk numbers to highlight the impacts of vehicle speeds and the benefits of slowness. On the danger issue, this graphic is a start.

But graphs and numbers don't persuade many people.

So Carlos and Despacio did a dramatic stunt to convey this message more forcefully (apparently causing consternation with their funders). With permission, they placed a mannequin (dressed to look like Carlos!) and put it on a sixth floor ledge.

As a horrified and curious crowd gathered, the team distributed flyers explaining that a 50 km/h vehicle collision with a person on foot is like the pedestrian falling from a six storey building.

By contrast, at 30 km/h, the crash is only like falling just one floor (and is less likely at this speed anyway).

Carlos Felipe Pardo, the executive director of Despacio.org, is a trainer, consultant, writer and nonprofit leader focusing mainly on urban transport issues in cities across Asia, Latin America and Africa.

His background is actually as a psychologist and he also has an MSC in Contemporary Urbanism from the London School of Economics.

IF YOU LIKED THIS

If you haven't already, subscribe (for free):
You can help me continue this work by becoming a Patreon patron of my efforts.


I would welcome your feedback. Leave a comment below!