But take a look at cities that have worked long and hard to get free-flowing traffic and affordable driving. I doubt you will like what you see.

This point was a central theme of my chapter "Achieving Sustainable Mobility" which appears in The State of Asian and Pacific Cities 2015 jointly published late last year by UN-ESCAP and UN-HABITAT.


The twin desires for congestion-free and affordable driving are understandable. They are politically seductive and play to motorists’ desires and the interests of car industries. But these desires are sending too many cities and their mobility systems down inequitable, costly and environmentally destructive development paths. 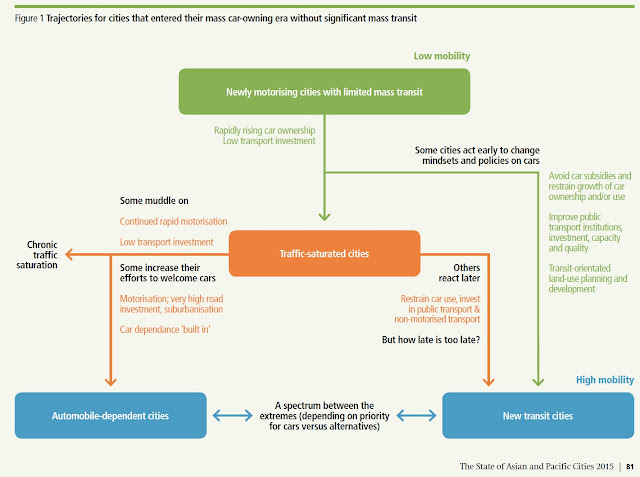 The results of preventing congestion and of keeping driving cheap


If private vehicle numbers rise quickly in a city with few cars, it is tempting to focus first on boosting road capacity. And, since such cities are not rich, it is also tempting to try to keep driving cheap.

The result, before long, is a "Traffic Saturated" city (increasingly filled with traffic but not yet well-adapted to cars). Such cities, such as Cairo, Delhi, Jakarta, Manila, and Tehran, have escalating problems:


Furthermore, if governments continue to work over decades to expand traffic capacity and to avoid cost burdens on motorists, they risk creating an increasingly "automobile dependent" city (thoroughly adapted to cars), such as Atlanta in the USA or Perth in Australia with:

So, focusing on easing traffic congestion and on keeping driving cheap will not help you get more sustainable urban transport.  What will?

The alternative? Strive to become more of a "New Transit City"!

Bogotá, Curitiba, Hong Kong, Seoul, Shanghai, Singapore and Taipei are examples of cities that have increasingly become New Transit Cities. Each was suffering as a Traffic Saturated city but took decisive steps to change direction, using efforts to:

Which strategy do you think is best for newly motorizing cities or traffic saturated cities across Asia, Africa and Latin America?