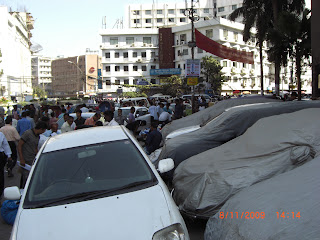 On-street parking (and double-parking) in the Motijheel office district of Dhaka.
Obviously the cars on the right are there all day.


As I mentioned last year, I have been investigating parking policy in 14 Asian cities. The report, commissioned by the Asian Development Bank (ADB), should be out in a month or two.

Over the next few weeks, I want to share some highlights. Yes, highlights. Don't laugh! Even I was surprised how much drama there is around parking. 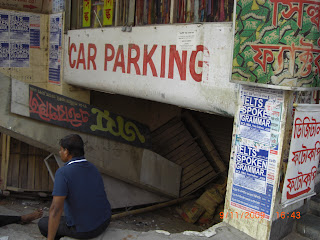 Basement in a commercial street in Dhaka signposted as 'car parking' (but there are stairs not a ramp and this space had obviously been used for shops before being demolished, presumably in enforcement action.)


Newly motorizing cities in parts of Asia face some alarming predicaments over parking. For example, in South Asia it is common to find something like this:


A commercial street is clogged with motor vehicles. Many are parked at the roadside, across kerbs, and on footways and dusty verges. Some cars are double-parked.

News reports highlight the ‘shortage’ and call for action. Meanwhile, basement parking lots of many buildings along the street are half empty. They charge a small fee that is slightly higher than is charged in the streets.

Municipal regulations require these parking spaces be provided as a condition for building approval. However, some buildings have shops in their basements instead of parking. Building inspectors were persuaded to ignore these violations. Occasionally enforcement action is taken and basement shops are demolished.

The city government also wants to build parking structures itself. But the projects so far have been expensive and have low returns. Moreover, they have not prevented on-street parking chaos in their vicinities. There are plans for many more such structures but budget problems are stalling the program. The latest plan involves a developer building 10 storeys of office space in return for creating five storeys of public parking. 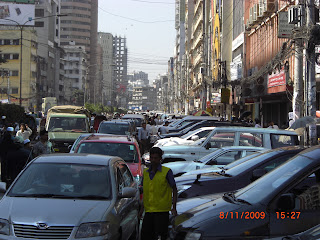 More on-street parking (and double-parking) in the Motijheel office district of Dhaka. The guy in yellow is a parking attendant, who takes the fee (T20 or US$0.30 per DAY I think it was) from drivers, including those who are double parking. By the way, all this double-parking is possible because almost all Dhaka cars are driven by a professional driver, who stays with the vehicle when it is parked.

The current South Asian solutions to these predicaments focus on minimum parking requirements for buildings and government-provided parking.

In many cities these policies have been ineffectual so far (as seen in these Dhaka photos). But where such medicine does create plentiful off-street parking, the side-effects may be worse than the illness (as in North America's autocentric suburbs).