Slow spaces for a Public Space Dividend in the Streets

By Paul Barter June 07, 2009
Shared space street design is a fantastic innovation. But most excitement about shared space (or “naked streets”) seems to focus on the counter-intuitive phenomenon of “safety through uncertainty”.

I think another important lesson from shared space has been neglected. A key benefit of shared space is that it expands the urban public realm. And this is done with little or no loss of transport utility. This point was emphasized by shared-space pioneer, Hans Monderman, but is often forgotten or under-emphasised.

This "public space dividend" is also relevant to many more streets than shared space itself will ever be applied to. Many street-design innovations can yield such a dividend if they create spaces where speeds stay below about 30 km/h. This would allow a surprising amount of what we now think of as traffic space to become part of the low-speed public realm.

How? I try to explain in an article, "Earning a Public Space Dividend in the Streets" (pdf), just out in "Journeys" (the magazine of Singapore's LTA Academy), Issue 2, 2009.

In my article, I argue that all of the following street innovations can offer us a public space dividend:

A multiway boulevard section in Vienna. The access-way (left) and the median are slow-spaces and are part of the public realm. The higher-speed traffic lanes are just visible to the right. They are 'traffic space'.
"These innovations shift the boundary between public realm and traffic space, so that a surprising amount of what we now think of as traffic space becomes part of the low-speed public realm. In shared spaces and in other slow zones, such as Tempo 30 zones and bicycle boulevards, whole streets and intersections are converted to forms of public space. In multi-way boulevards, public realm includes everything from the building line to the outer edge of the central, high-speed traffic lanes. This newly expanded public realm serves local motor vehicle access, slow-mode movement, public space roles and sometimes some through-traffic (with low priority and at low speed). Only the high-speed traffic movement is excluded and kept within traffic space." (pp. 33-34)

I also suggest that this space dividend should be especially welcome in dense cities that are congested and short of public space. Such street designs should be well suited to Asian cities where a lack of space seems to make it difficult to create safe places for walking, cycling and for pleasant urban places.

In fact, Asian cities are full of "accidental shared space".

"The informal emergence of shared space street dynamics can be seen when pedestrians and/or slow vehicles dominate a street space, leaving motorists little choice but to proceed on a negotiated and cautious basis. This is common in inner urban streets of many developing countries (see Figure). It can be seen also on the narrow streets of Singapore’s Little India area. Such “chaos” is of course widely lamented, with pedestrians and other road users blamed for indiscipline. Moreover, at times of low pedestrian activity, traffic speeds do rise and crash risk and severity can become very high. However, the imposition of traffic-focused design in such places would often be a mistake. A better option for these streets might be shared space by design rather than by accident." (p.37) 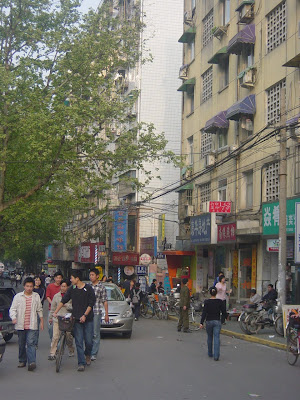 An example of “accidental shared space" in Nanjing, China