By Paul Barter November 30, 2008
Many countries control the price of motor fuels.

This got their budgets into deep trouble in the first half of 2008. The high price of oil caused massive budget blowouts. Malaysia, Indonesia, China and India among various others faced the politically painful necessity of raising gasoline and diesel prices or face deep budget cuts. 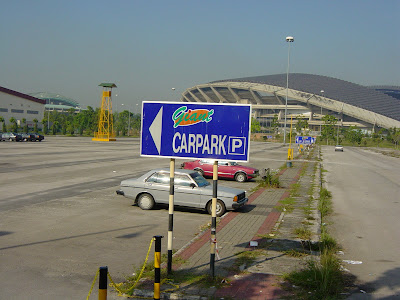 Yes, the parking lot is Giant too!
Cheap fuel, cheap cars and cheap parking have helped create a
remarkably car-dependent landscape in Malaysia's urban areas.
But what should these countries do now that the price of oil is way down near US$50 per barrel? Unfortunately some are cutting fuel prices again. The Indonesian Government will cut the price of gasoline from Rp6000 to Rp5500 per litre on Monday. India probably will in late December. Malaysia has already cut the price four times since its big June price rise.

Isn't this a bit short-sighted? We all know how hard it will be to raise prices again if (or when) oil prices rise again.

Would it not be smarter to take this golden opportunity to end these unwise price controls? Now seems like a relatively painless moment to shift to letting gas prices rise and fall with the global price of oil. Then next time the price rises and people start to scream, DO spend money to help the poor who will be hurting, but please DON'T control fuel prices again.

I do realise that this would not eliminate political pain if oil prices go up. The politics of fuel prices are nasty. But they are especially nasty if the prices are a government decision and not a market phenomenon.

So is this change happening yet? There are strong signs that it might be!

Malaysia seems set to shift to a 'managed float' system for fuel prices. Confusingly, it has also promised a RM0.30 subsidy but there is talk that this may be made to only kick in 'when necessary' (when oil prices are high). An announcement next week may clear up the confusion. I have argued before that fuel subsidies are a bad idea but a subsidy with floating prices is maybe not quite as pernicious as a fixed price I guess.

China was also reported last week to be considering some kind of managed float for fuel prices. But only so long as oil prices stay below some threshold, such as US$130 per barrel.

[Update: I now notice that Indonesia is thinking of doing the same.
"In the future, we expect (subsidized fuels) to follow (the market prices) automatically up to certain ceilings (prices)," the ministry's head of fiscal policy, Anggito Abimanyu, told reporters.]

[2nd update: Armin Wagner of GTZ recently wrote a short discussion paper on exactly this issue: "EXPLOIT FALLING MARKETS: a contribution to the debate on fuel pricing mechanisms". It was written as part of GTZ's International Fuel Prices Survey process. It is available for download via HERE. Thanks Armin!]