How do those Dutch do it?

By Paul Barter October 01, 2008
You probably know that the Netherlands has lots of cycling. They sure do! An amazing 27% of ALL trips* in this rich country in 2005 were by bicycle.

Riding in the Netherlands is also remarkably safe. 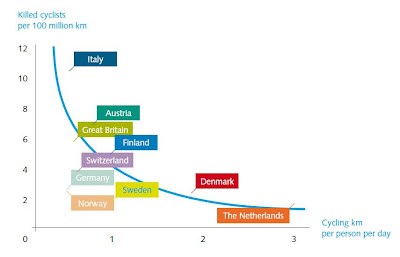 Safety in numbers (from "Cycling in the Netherlands", p.13)
So what is their secret?

How did the Netherlands get to be such a cycling paradise? There are several rather unhelpful theories.

"Cycling in the Netherlands" (pdf) is an easy, non-technical read and is visually very striking.

One of its key aims is to share with the rest of us the lessons learned from decades of experimentation with bicycle policy by various Dutch agencies and local governments.

Based on the frequent requests for information from policy-makers, politicians and NGO’s from all over the world, we decided to produce a comprehensive brochure about cycling in the Netherlands, giving an actual overview on the results and findings of relevant studies and experiences.

I also highlighted the document recently on the Cycling in Singapore blog.

So what CAN the rest of us really learn from Dutch bicycle policy?

Probably we can learn many things. But here is one key conclusion from the report ... bicycle policy works!

... a consistent approach by Dutch policy makers to the bicycle has had a demonstrable effect. Municipalities which have had a focused bicycle policy for some time have a higher bicycle share than other cities. Traffic safety has also benefited from the bicycle policy. (p.19)

* the data cited at the top of this post was from the Cycling in the Netherlands report (p.9)

[Update: a new website, Fietsberaad, will also be of interest for Dutch bicycle policy insights. This is "the brand new international website of the Dutch Fietsberaad (Bicycle Council), the expertise centre for cycling and all related subjects. This English website provides access to the most up-to-date information, the main facts and the best examples from the Netherlands and other countries."