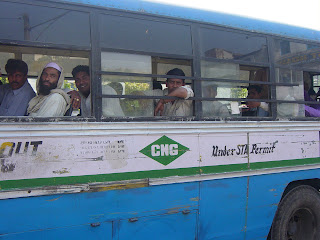 Buses may not be sexy (least of all Delhi's buses like the one above). But most cities desperately need to improve their basic bus systems.

And I am not talking about Bus Rapid Transit (BRT) this time. No matter how much BRT you put in, neglecting the basic bus system will undermine your efforts. Jakarta is finding this.

The same goes for urban rail systems. These work best when complemented and fed by a good bus system. Seoul realised this in 2004. Unable to expand its subway, it turned to bus improvements for a dramatic boost to its system.

Maybe the only thing less sexy than a bus is bus regulation!

Getting the regulatory framework right is at least as important as the engineering. Maybe more important!

It is hard to get people to focus on this but better understanding of the key choices would save most cities a whole lot of trouble. Certain ways of regulating and organizing a bus system can set the scene for long-term success. Certain other ways are dead ends that work well only if you have a large number of captive users, who have no other choice.

Take a look at the categories below.
They are from a recent paper I wrote on this [Update: It is called "Public Planning with Business Delivery of Excellent Urban Public Transport" published in Policy and Society, vol. 27, no. 2, 2008. See a preprint pdf here and here is the journal's link].

Which one fits your local bus system best? Do these categories work for your city? Feedback is welcome, since this typology is a little different from the usual approaches.


I have argued that Option 2 is catching on and seeing lots of success, especially when combined with ambitious efforts at network integration. Of course, planning is no guarantee of bus system success (as many public monopolies show).

But success with urban buses is certainly elusive without strong planning. Options 4 and 5 are serious mistakes. The era of a strong push for deregulation of bus systems seems to be over.