BRT Dos and Don'ts (Part One)

By Paul Barter September 28, 2008
Is your city considering Bus Rapid Transit? If so then you are in fine company.

As more and more cities implement BRT, we are gradually learning what works and what doesn't.

DON'T put your BRT in an outer lane by the curb
Much more than median lanes, curb-side lanes are prone to delay from turning vehicles and stopping taxis and to conflict with bicycle users. So ...

DO put BRT in the median location
It simply works better in most circumstances.

DO have lots of doors ... and make them wide ones
Walter Hook of ITDP says that the "size and number of doors is more important than bus size" for speed and capacity of your BRT system. 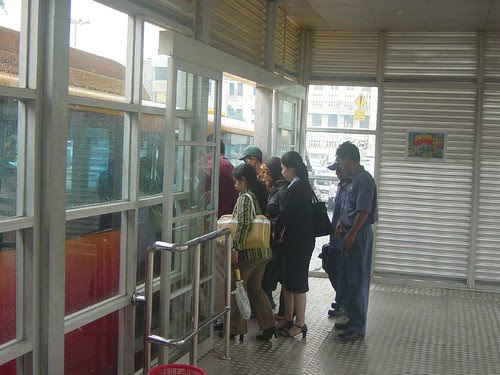 Jakarta's BRT has boarding problems
DO have level boarding of the buses
Having no steps up when boarding makes for speedier boarding and universal accessibility.

DO have prepaid boarding in stations
This also speeds up boarding.

DON'T skimp on pedestrian access to the stations
Some people think this is only an issue for median BRT lanes. Wrong! Either way, passengers need to cross the road safely. As I have explained before, regardless of where in the street the BRT is, someone making a round trip will end up crossing the whole road to finish their journey. Delhi's BRT is one that has faced disinformation on this issue.

DON'T put your first BRT where buses face no traffic delays
Walter Hook of ITDP points out that Beijing's first BRT route made this mistake. There is physical separation on sections with no congestion but no physical separation where there is congestion. So when we factor in the new need to transfer, the BRT system actually increased passenger travel times rather than decreasing them! So ...

DO put your first BRT corridor where buses are severely slowed by congestion
... so that BRT really makes a difference and so the speed improvement will be dramatic.

DO put BRT in corridors with lots of buses
If a corridor has a huge number of buses contributing significantly to congestion then a closed BRT that replaces all of those buses can improve speeds for everyone. This is very often the case in Latin America, where bus congestion has been common. 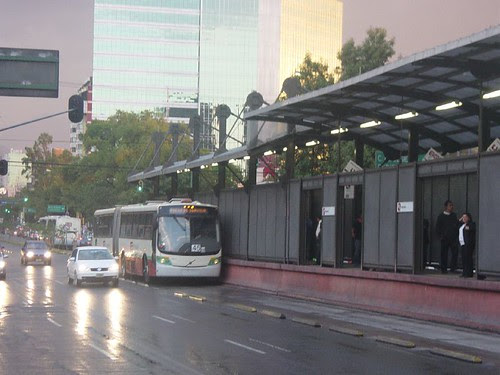 Mexico City's Metrobus BRT replaced large bus and minibus flows.
Fewer buses, higher system capacity.
DON'T plan an under-capacity system
If patronage is likely to grow then planning your system with inadequate capacity can be a mistake. Jakarta's Busway is an example of a system designed with relatively low capacity but which already needs much more, especially at interchange points. Jakarta's BRT buses have only one door, causing delays at all busy stations.

DO design for buses to pass each other at stations
This can make a huge difference to the capacity of the system. If space is tight, there may be a space-saving design that can achieve this.


Acknowledgement: Most of these tips are adapted from ITDP's work, and especially from a photograph-rich presentation by Walter Hook (pdf here). ITDP's BRT Planning Guide is a vital reference. Any mistakes are mine.