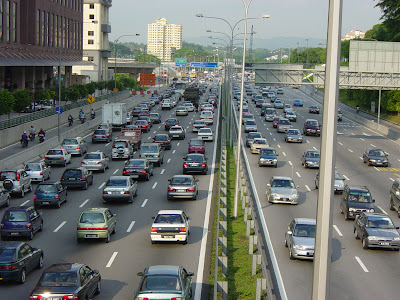 Traffic on Kuala Lumpur's Federal Highway
I wrote before about the chicken-and-egg issues of road pricing and improvements to public transport.

I mentioned Kuala Lumpur's long history of regularly proposing travel demand management (TDM) and but then forever putting it off, while waiting for the public transport system to be 'complete'. As I said in that earlier post, they are still waiting.

Well, right on cue, here we go again! This is from Malaysia's New Straits Times:

Motorists may soon have to dig deeper into their wallets to enter and move within the Kuala Lumpur city centre. If what is proposed in the Draft Kuala Lumpur City Plan 2020 is approved, motorists entering busy and usually congested roads will be charged a ‘user fee’ as part of an area road-pricing (ARP) scheme. Under the scheme, motorists would have to pay varying prices during set operation periods each time they pass certain entry barriers.

The measure is designed to control traffic within the city and achieve a more efficient use of road space in a bid to alleviate congestion, reduce travel time and limit air pollution caused by vehicular emissions.

However, Kuala Lumpur City Hall Master Plan department director Zainab Mohd Ghazali said the road area pricing would only be implemented when all public transportation facilities are in place.

I don't think the journalist needs to worry about any 'digging in wallets' any time soon over this. City Hall seems to be already playing it down which makes it hard to imagine any politicians getting excited about this.

Show me the money! (and fix the politics in the process?)

My earlier post on this did not examine why Kuala Lumpur keeps chickening out of TDM. So here are some thoughts on what might be missing every time.

The glaring omission from every one of KL's TDM proposals over the years is the crucial issue of where the money would go.

No-one (except policy wonks!) will be keen on road pricing unless they see some tangible benefits, or even some cold hard money, out of the plan. You need to create some specific winners who will champion the idea. Phil Goodwin saw this many years ago with his 'rule of three' for allocating the benefits of road pricing. Donald Shoup's "parking benefit districts" proposal is similarly about creating local allies for performance-based pricing of parking. Actually, King, Manville and Shoup have also applied the same idea to freeway congestion pricing in Los Angeles, arguing that it would stand a much better chance if the revenue went to the neighbouring municipalities.

This suggests that road pricing in KL will never be more than a pipedream until it gets linked to a politically savvy plan for spending the money.

Malaysian planners and politicians are not stupid, so why have they not tried to create some allies for road pricing in this way? Maybe the problem is influence from nearby Singapore, which is unusual in simply putting its road pricing money into general revenue. Or the lack of a politically realistic plan is a sign that KL's leaders are not really serious about their TDM proposals? Maybe this is all just lip service to be seen to have a plan up their sleeves?