Is the Delhi BRT popular?

By Paul Barter May 19, 2008
Could it really be that the Delhi BRT pilot is actually popular?

You would certainly not know it from reading the Times of India.

However, an early survey (reported in early May) suggested that even in its supposedly disastrous first week, the system had a very high approval rating among key groups - bus users and bus drivers. Even car users didn't dislike it in such huge numbers as certain newspapers have implied or assumed.

This report on an opinion poll by NDTV is a bit out of date and by now the unrelenting bad press may have swayed opinion against the system. But I want to highlight its stark contrast with the highly negative impression presented by much of the media.

It's one of the most controversial infrastructure projects in the country but for all those who said that the Delhi Bus Corridor system was an out and out failure, here is a reality check.

A poll conducted by NDTV shows that there is a sharp divide in opinion on the success of the project between those who use buses on the corridor and those who drive cars on the same stretch.

Perhaps the big message here is that public transport must be considered a practical option for everyone, including people who cannot think about life beyond their luxury cars.

There have been many days of chaos, some days better than others but the debate has divided the city down the middle.

In an exclusive opinion poll, NDTV has asked car and bus drivers as also bus passengers whether this will work?

# 65 per cent of car drivers feel the Bus Rapid Transit System(BRT) has made traffic congestion worse in the areas where the BRT runs.

# A whopping 75 per cent of bus drivers say the BRT is a huge improvement for buses.

# More than 50 per cent of car drivers say that the new bus stops in the middle of the road do not make driving more difficult.

# Bus drivers say it's easier to pick up passengers from the new bus stops and 72 per cent of them say the middle-of-the-road stops are working better than the earlier system.

# Most car drivers, 76 per cent, however, say that they are worried about hitting pedestrians crossing the road.

# 61 per cent of car drivers say driving is easier now that buses have their own lane bus drivers.

# 82 per cent of them say the new bus lanes for them make driving easier.

# 71 per cent believe it will help in reducing travel time - most bus users say their commute time has already been slashed by 50 per cent after the BRT was introduced.

# 60 per cent of bus commuters say there are enough Marshals and traffic policemen to help guide them to their buses.


The report doesn't mention how NDTV obtained the sample unfortunately but does suggest that it draws from users of the pilot corridor itself, rather than from the broader population of Delhi.

Keep in mind that Delhi's modal split, as cited by Dinesh Mohan (with data for around 2000 I think), is:

It is almost certainly still true in 2008 that buses carry a very large % of the motorised passenger trips in Delhi. So yes, the opinions of bus users (and bus drivers) who use the BRT system should count for a lot in a city like Delhi.

Does BRT just have an image problem?

How can there be such divergent perceptions of its success? Is BRT particularly prone to this kind of problem?

Does more attention need to be paid to image and marketing in its implementation? Would such PR effort have improved the Delhi experience? Perhaps the Delhi Government should have hired a top PR consultant (which they have now done) earlier in the process. 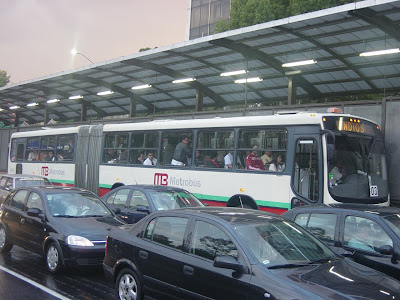 Context matters! Mexico City's 'Metrobus' (pictured) is a high-quality closed BRT line which attracts middle-income people and is seen in that huge city as an upmarket and modern mass transit system when compared with the metro system there, which is seen as downmarket. These attitudes contrast starkly with views of Metro and bus in Delhi.
The CityFix blog also highlights a fresh (and positive) perspective on BRT for Indian cities (with a great photo of part of the Delhi corridor too).

I don't know if Delhi's BRT will eventually prove itself or be widely acclaimed. It is after all a relatively unambitious open BRT implementation. I would really like to see some careful analysis of its current actual performance too and not just opinions about its performance.

But the reported survey above does highlight that we should be skeptical of the hype that Delhi's BRT is a universally loathed disaster.

Thanks to the folks chatting in the delhimetro yahoogroup for alerting me to this opinion poll.