Car ownership in Japan: Over the Hill? 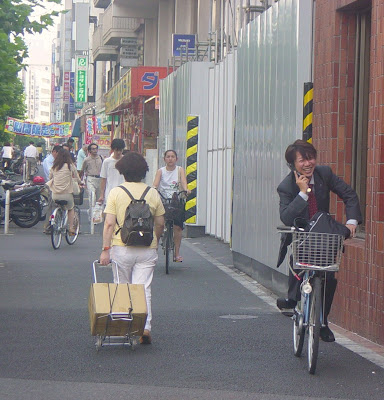 Who needs a car?
I take statistics like this with a grain of salt, but apparently Japan's population of cars and motorcycles has just followed the human population by declining for the first time since records have been kept.

Reports said that the February total was 0.2% lower than a year earlier. With more than 600 per 1000 people, there are still a lot of motor vehicles in Japan.

But it is interesting that this news came on the same day that Japan's economy was reported to be growing at a faster-than-expected rate.

This reminds me of reports in January that Nissan is worried about the declining Japanese interest in cars. This was put down in part to economic uncertainty and a rapidly ageing population. (here is another comment on that report)

A survey last year of 1,700 Japanese in their 20s and 30s by the Nihon Keizai Shimbun, Japan's biggest business newspaper, discovered that only 25% of Japanese men in their 20s wanted a car, down from 48% in 2000. The manufacturers' association found that men 29 years old and younger made up 11% of Japanese drivers in 2005, roughly half the size of that group in 1993.