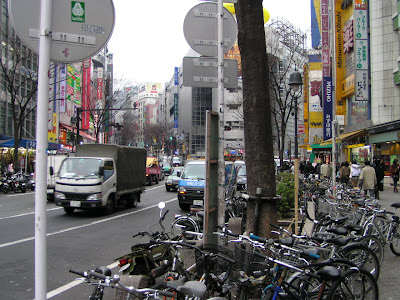 Shibuya in Tokyo. 'Bicycle pollution'?
You may be familiar with the argument that car-sharing helps reduce pressure on parking space.

You may also be aware of the meteoric rise of interest in bicycle sharing schemes, with Barcelona's Bicing and Paris' Velib the most famous.

This article from Japan connects bicycle sharing, which is on the rise there too, with parking issues. But the parking problems addressed are with BICYCLE parking not car parking.


Cycle-sharing schemes reduce parking violations, raise profits
The Yomiuri Shimbun
(May. 19, 2008)
OSAKA--While bicycle-sharing schemes are becoming common in urban areas as more importance is placed on the environmental and health benefits of cycling, such schemes are also seen as an effective countermeasure for the illegal parking of bicycles.
At a condominium in Konohana Ward, Osaka, which was completed in October, each of the 220 families living there was allotted a space for two bicycles. However, five bicycles are also available for sharing at the condominium for families needing to use more than two bicycles or for residents who do not have bicycles, but occasionally want to ride one.
Residents can use the bicycles at a cost of 100 yen for 12 hours.
"I only ride a bicycle once a month, so sharing is enough for me," said Ryosuke Goto, 27, a resident at the condominium.
Osaka-based River Industry Co., which sold the condominium, has introduced bicycle-sharing schemes at seven condominiums it has completed since 2006. The firm also plans to introduce such schemes at condominiums it is planning to build in the future.
"The scheme is effective at preventing residents from parking bicycles in nondesignated areas," an employee at the firm said.
An associated firm of West Japan Railway Co. was one of the first companies in the nation to introduce a bicycle-sharing service. The firm's bicycle-sharing business started in 1998 at JR Suminodo Station in Daito, Osaka Prefecture. Monthly fees range from 1,500 yen to 2,500 yen--close to the monthly fee for using a bicycle parking lot. The firm now offers the service at 19 stations in Osaka, Hyogo and Shiga prefectures. A total of 6,000 people use the service each day and sales from the business reached 170 million yen in fiscal 2007.
Hankyu Corp. and Kintetsu Corp. have also launched bicycle-sharing operations once it became apparent that they could be profitable as businesses. Some local governments, including the Yao municipal government in Osaka Prefecture, are also offering similar services at stations for citizens.

Bicycles are so popular (for short trips and to access rail stations) in Japan's large cities, and public space is at such a premium, that overflowing bicycle parking at busy locations has been given the label 'bicycle pollution'.