Will Delhi's BRT be given a chance to prove itself? 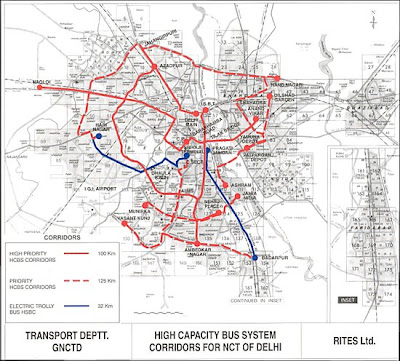 Map of BRT proposals from TRIPP, IIT-Delhi
Delhi's BRT pilot phase has entered a trial period since Sunday. The first 5.6 km is due to start formally on 1 May.

Unfortunately press coverage of the project continues to be extremely hostile. Reading some of the articles on this in the Indian media one could be forgiven for thinking that Delhi's entire congestion problem is caused by 5.6 km of busway.

All this looks worrying for Delhi's BRT. If politicians cave in and abandon the project now it would be a huge setback for public transport in India. A hasty, low-quality start in Pune didn't help either.

Ahmedabad's BRT which is under construction is aiming at a much higher standard of BRT implementation than any other Indian proposal so far. It has benefited from technical assistance from ITDP. But I fear even that project might be harmed by any implosion of Delhi's high-profile (albeit lower standard) effort.

Visualising BRT in Ahmedabad, India. Rendering by: CEPT University, Ahmedabad (Source: ITDP)
It would be a great shame if a lack of patience to sort things out in Delhi turns BRT into a dirty word in India. Few of Delhi's media opinion leaders seem to be willing to give it any chance to prove itself.

From negativity to constructive efforts to improve?

As I have mentioned before, Jakarta's busway (a closed system, unlike Delhi's open one) has also seen its share of controversy. But the debate there seems to be gradually shifting. Instead of "let's get rid of this catastrophe" the main question seems increasingly to be "How can we make this work better?" Progress is slow but that seems like progress to me and a great sign for the future of Jakarta's public transport system, which needs all the help it can get.

Meanwhile, BRT in China is expanding with systems of various levels of ambition that are succeeding in both very large cities and smaller ones. New corridors in Beijing will be on show during the Olympics.

If you are having trouble visualising successful BRT here are a few links to videos and pictures:

Can Delhi's BRT be turned into a success?

I am not sure. I don't know enough of the local details. But having come this far, surely it needs a sporting chance.