Motorcycles on the Rise in Africa

By Paul Barter February 29, 2008
Cheap motorised two-wheelers have long been ubiquitous in various Asian countries. Now their numbers are surging in Africa too.

Taiwan was apparently the pioneer of mass motor scooter ownership and use in the 1970s. 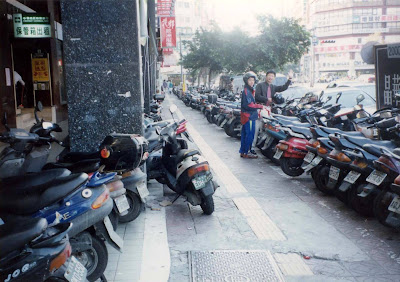 Scooters lined every footway in 1996 when I visited Taipei.
Today Vietnam's cities are the undisputed motorcycle capitals of the world. The volume of motorcycle traffic in Vietnamese cities is astounding! 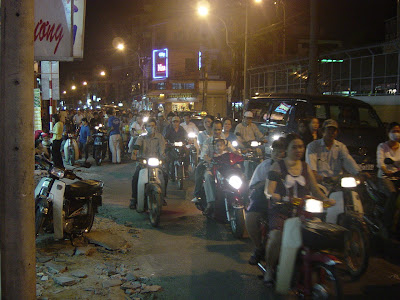 We have seen in Asia that motorcycles can be both highly problematic and a boon for people who sorely need better mobility. The dilemmas often create ambivalence, which is reflected in the diverse policies seen in Asian cities.

Some welcome and accommodate motorcycles (as in Malaysia) while some seek to limit or even ban them (as in some Chinese cities). Vietnam's large cities have recently been trying to limit new registrations of motorcycles, apparently without much effect.

Rise of Asia-made motorcycles in Africa
Until recently, motorcycles were not a major feature of African cities. Except that is for a few places. These include Africa's motorcycle capitals, Ouagadougou in Burkina Faso and Bamako in Mali, where more than 50% of motorised transport is on motorcycles. For more on this, see this pdf of a World Bank presentation on urban transport in Africa.

However, an item last week from Kenya's Business Daily (Kenya: Bikes Rev to Beat Rising Fuel Costs And Traffic Jam) highlights the increasing role of motorcycles in eastern Africa, both as taxis and for personal transport.

The boda-boda of Uganda (both on bicycles and on motorcycles) are well known. Now it seems the boda boda business has also been growing in Kenya, especially since a recent crackdown on unroadworthy vehicles created a vacuum in transport supply. Motorcycle ownership by individual households seems also to be rising rapidly.

The article also highlights a growing role for motorcycles in rural areas, citing a recent study led by Paul Starkey (see here for a powerpoint summary: slide 10 focuses on motorcycles). Despite the obvious and serious safety issues, the report is positive about the contribution of motorcycles to African rural transport. (By the way, it also laments the policy neglect and hostility to bicycles, which are also increasing in importance)

The transport policy 'industry' doesn't seem to have any clear answers on what, if anything, to do about motorised two-wheelers. We are far from any consensus on what policies would be useful. Should we welcome motorcycles? And if so, what policies could maximise the benefits while reducing the harm?

I don't know but I wish I did.

Motorcycles have been completely banned in Guangzhou, and are in the process of being banned in all other leading Guangdong and Pearl River Delta cities including Shenzhen, Dongguan and Zhuhai. Yet at the same time, Guangdong is the largest motorcycle-producing province in China, overtaking Chongqing in 2006. Many other big Chinese cities have plans to phase out motorcycles and have stopped accepting new registrations. So where are the motorcycles being exported? 760,000 motorcycles were exported from Guangzhou in January 2008, a 16.6% increase on a year earlier - when the motorcycle ban first came into effect. 70% of the exports were destined for Africa. The 530,000 motorcycles exported to Africa is a 48% increase from January 2007.]