A bad week for BRT in Delhi

A backlash against BRT has been hitting Delhi.

Delhi's BRT, or High Capacity Bus System (HCBS) as it is often known in India, has been facing a barrage of vitriolic newspaper attacks. These have included quite vicious assaults on the credibility of IIT Delhi academics, Dinesh Mohan and Geetam Tiwari, who have championed and helped design the system (if you follow the link, click on 'urban transport').

Anti-BRT headlines have included:
Unfortunately, it appears that these and similar attacks have now drawn a political response. Yesterday, the Chief Minister of Delhi, Sheila Dikshit, was reported (somewhat triumphantly by the Times of India) to have halted further BRT development beyond the initial corridor's first phase. Other routes will apparently need to wait until the initial project proves its worth. It is under construction and due to open in August.

See here and here for other viewpoints, for some of the text of the articles mentioned above, and for some analysis of this media phenomenon. 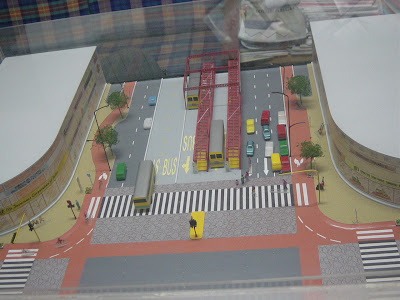 A model of part of Delhi's initial BRT corridor by the IIT-Delhi team.
Delhi is not alone in its BRT troubles. For example, Jakarta's busways faced setbacks late in 2007, with several corridors forced to open to mixed traffic. This was a response to media uproar over congestion that was attributed to busway construction and a poor level of bus service on the most recently-opened corridors. A Jakarta Post article provides some background (cache version here). If you read Bahasa Indonesia then consult the Batavia Busway blog for more insight and updates.